“Heart of a lion, sparkle of a star
Subtle like morning dew, flawless is her scar.
In this world flooding with agitation
Love is her only religion.
She’s got many roles to play right,
In this enormously brief stage of Life.
If in some way you hinder her to shine,
She could be as stubborn as the stains of red wine.
She can be worthy of more than you can imagine,
Fearless, unstoppable, or you may just call her WOMAN.”

Mother. The most selfless being that God has ever created. Mothers are one of their own kinds. They are the epitome of the word itself. As a woman, she cares for her family throughout her life without having self-seeking expectations but just has 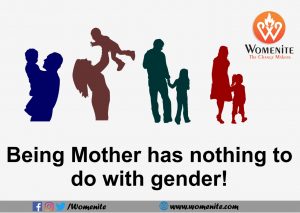 one hope that her family gets all the happiness in the world. A woman has to play several roles in her entire lifetime and one of the most strenuous yet blissful roles is that of a mother. Although God has beautifully created mothers to be selfless beings, one should not overlook the sacrifices that they have to make for the sake of their family. But why should mothers have to annihilate their identity in order to maintain their conventional image as “good house makers”? It is quite ironical to read about people who appreciate their mothers for her selflessness and cite her as the entity of sacrifices. Yet they never encourage their mothers to move ahead with their personal interests and passion. We all claim to love our mother for she has forgone her entire personhood just to serve her family. But do we ever make an effort to acknowledge her own dreams and support her to take a step towards it apart from everyday household life?

The gender differences have segregated man’s and woman’s job according to the conventional way. By default, women are expected to get married and become wives and mothers and serve her family for the rest of her life. Sadly, those women who choose their dreams above marriage are harshly criticized for being ignorant and self-centered towards being a “housewife”. What is so inappropriate if a woman decides to build her career before she settles down for marriage? It seems improper only to that hypocritical society who have a conservative mindset about women. The society would even disapprove of those housewives who take an initiative to make something out of their existence. People’s expectations have made it almost normal for women to renounce their individuality to become “good mothers”. But how is it fair to the womenfolk who are also complete individuals just as men are? It is one of the hardest facts in life that women have to struggle their way through every phase. Be it a simple mother or the CEO of a huge empire, she has to forcefully let go of several things in life to shoulder her particular responsibility.

Somehow we become ignorant to the fact that women, as individuals, have full rights to decide how their life would be. Whether they want to remain as “good mothers” or they want to make something extraordinary of their life apart from making sacrifices, should be left only for them to decide. We live in a generation where everybody is moving forward with their future goals. However, we should not forget to hold our mother’s hand and make her believe that she is more than just a housewife. Besides, we should also stand in support for those women who exceed through hardships in life to live their dreams. This Mothers’ Day, let us all make an endeavor to help our mother embrace her individuality, make her recognize her capabilities, empathize with her dreams and encourage her that she can do more than just household chores.