Mancrimination – Calling of the “Forgotten Sex” or a “Parody” 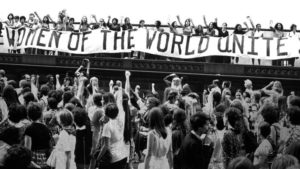 With social media going gaga over the recently launched campaign by the “Maggcom” Magazine named – Mancrimination, Men Empowerment can be seen to be on its way! In this self-constructed campaign talking about the self-constructed issues faced by the male society, it is necessary to remind the “so discriminated sex” some real facts…

Women and struggle have been each other’s companion for ages. From slavery to unequal wage bars; from education to evil social practices; and from social participation to political participation; women have always been at the receiving end. At the discriminated, marginalized, economically deprived, literally backward, and the weaker side of the society. And to this day, the discrimination has never been completely eroded from the society, completely. Which is why, there are steps taken by NGOs, Governmental bodies and other private organizations working so hard for the “weaker sex” to fight and establish their identity.

The fact that the struggle never ended, in itself, shows which of the two genders needs the campaign and why!

Oh by the way! Long gone are the days when talking about sex, expressing the feeling of having it and so is seen offensive by the women. But have a look at this –

If it’s a woman’s world, then how do men like these get through so easily?

Since the Victorian age, women have been asked to follow a self-constructed code-of-conduct society created in order to maintain the male-female hierarchy. The only bread earner of the family was male, while the women were supposed to dress up, present smartly, learn the house chores, and be least educated and so on. Just like traffic rules, society had rules for women too.

Men following a certain code-of-conduct showed how respectful, gentlemanly and courteous they could be. BAM! Holding doors, the bags or giving away the seats to your partner, old, pregnant or visually impaired women is not a sign of discriminating man in a man’s world! Rather, it shows how you treat the women back at home.

I know not every last seat is a ladies seat,

But offering it to someone who needs it more is a generous deed!

While it is true that men are in the backseat of the ride currently and that the laws are being made keeping women’s safety in mind; it should not be forgotten what lead to the present scenario. Men are subjugated by their failure of wearing make-up while the society has always taught women to wear a false identity to woo males. Men raise an argument against the issue of separate public transports and compartments in public transports for women while the assaults and harassments faced by the females gave birth to this.

The arguments may go on and on forever…

The need of the hour is rather to understand much more than the issue rose by Maggcom. Gender equality has troubled men as well as women for decades now. ‘We are more alike than different’ and the privileges offered to women now are the results of years of struggles and movements launched by the brave women. Though the concern may make you feel for the male community of gradually becoming the weaker or less privileged sex, in reality, till date –

Women empowerment never aimed at dethroning male from the society, rather it was a collective effort made to make women feel comfortable, safe and secure in a patriarchal society.