No Uterus, No Opinion!

Womenite – The Changemakers Uncategorized May 30, 2019

Recently, the most aggressive anti-abortion law was signed by the Governor of Alabama which has jeopardized the rights of womenfolk. According to this law, permissions for abortion will be granted only if the mother’s life is at risk or if the fetus cannot survive. However, cases of rape and incest will not be considered as exceptions. Not only just Alabama but also a growing number of states have drastically restricted access to abortion. States like Missouri, Mississippi, and Georgia have pursued the so-called “heartbeat” bills- legislation that would ban abortion as soon as a physician is able to detect a fetal heartbeat.  The Governor of Missouri claims that the nation stands for life, protection of women’s health and advocate for the unborn. How is this fair to the women who have been raped? How is this fair to the women who have been the victim of incest? Shouldn’t they be given the full right to decide whether to give birth to the residue of their criminal or not? 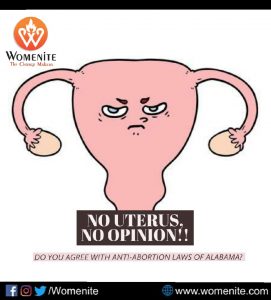 All the citizens of these states, especially women, of course, are protesting massively for the independence of their womb and claims that the government should not interfere in their right to give birth.  Alabama declared under the “Alabama Human Life Protection Act” that performing an abortion would be a felony. However, the women receiving an abortion would not be held “criminally culpable or civilly liable”. This law has completely strangled the right of women to control any unwanted pregnancy even after the failure of contraceptive methods. How can a woman give birth to the child of a rapist? After getting brutally assaulted, she can’t live with the memory of it which that innocent child will remind her. Obviously, it will be a living nightmare for her. Also, it is callously unfair for the victims of incest. The details of the Missouri abortion bill says that abortion would be banned after eight weeks of pregnancy. The doctors who perform later abortions would be penalized with five to fifteen years of imprisonment. In most of the cases, the woman is not even aware until the fifth or sixth week that she is pregnant, especially when she’s not expecting to be so. Even after discerning that she is pregnant, she doesn’t have the independent right to decide whether she is ready to give birth or not. How can the Government show a lack of sensibility towards it?

These anti-abortion laws will only do more harm than good. If these laws succeed, they will not bring an end to abortion. Instead, it will punish the most marginalized and the most vulnerable. Group of low-income people, women of color, and victims of rape and incest are most likely to be harmed. The lawmakers should ensure that unintended pregnancies are exceedingly rare and no one is the victim of rape and incest. However, it does not seem that they are working towards these goals. The lawmakers should be more focused towards creating a world where people, especially women, are free to make their own decisions without any fear or coercion. Women are gifted with the power to create life inside their womb so the decisions regarding it should also the left in their hands.